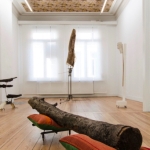 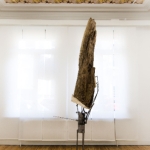 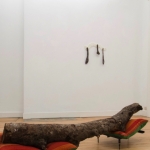 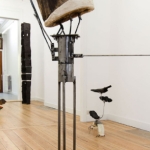 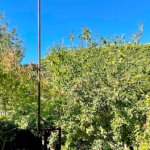 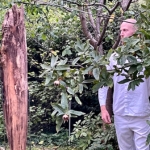 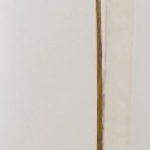 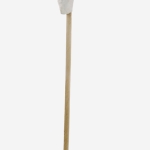 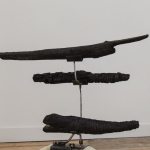 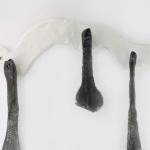 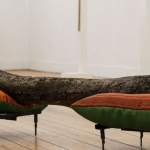 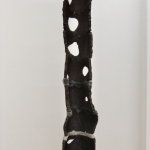 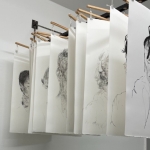 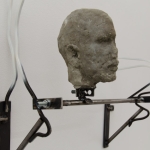 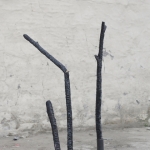 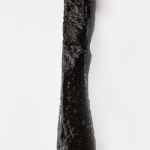 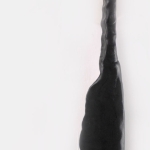 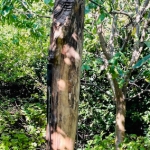 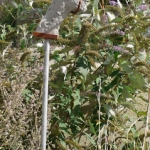 For years now I deeply admire Robert Soroko (°1990) for his serene attitude to life, which wondrously coincides with his work. Since the days of Joseph Beuys (1921-1986) and his 'social sculpture', this has been an ideal for some artists, female, male and non-binary: not striving to produce artifacts that fall outside life, as a kind of fringe or decorative dessert, but living one's life in such a way that it speaks itself like a work of art, without words, humble but critical, awake and rebellious, sometimes creating unforeseen objects that others like to cherish as works of art. Often these objects stand on thin, folded toes: the tip of their heads attached to the all englobing void, yet connected to the earth. And thus silence is stretched like a sustained, slowly revolving attention to all things, each of them becoming an axis around which our own lives cautiously unfold, or get dispersed like leaves in the wind.

Using simple materials such as iron, wood, plaster, foam, clay, glazing, a single found object, nuts and bolts, Soroko creates constellations that balance in fragile equilibrium, as if lifted into a thin area where they become weightless and can sway invisibly like reeds on a windless day. Here as well there is silence, growing from the held breath of the person who establishes the balance. Sometimes these asymmetrical totems, masks or fetishes are set in a spinning motion. A lever is placed. And then the mover starts to step carefully, feeling and groping, listening with the body to the momentarily upright, elongated object and to the surrounding space, the other movers, the spectators…

Soroko's attitude to life and work start from perception. Drawing, painting and modelling, he has increasingly sharpened his ability to perceive and outwits his blinding habitual thinking. His fingers, hands, arms, spine, legs, feet and eyes, his breathing: like an autonomously thinking, well-oiled machine they sing movements that leave traces. The stunning charcoal portrait of the artist Yingfei Li; the charred branches held up by metal uprights; the white plaster pedestal resting on four tiny feet, to which a hand-sawn oak slat is attached, carrying a ceramic head and bending slightly under its weight, away from the plaster pedestal; the rotating metal supports of found branches or other tree shards; the interlocking ceramic arches that form a tower like vertebrae; the ceramic knives, shaped by hitting a strip of clay on a table like a pizzaiola.

Tiny, white-grey, circular spots and pits make the ceramic blades resemble the first metal objects cast into the earth. The colors and curvature of the found tree pieces remind me of a Dogon door from my childhood. The shiny, sanded welds and the black iron bring to mind Panamarenko's submarine. The meditative performances are reminiscent of Iyengar's interpretation of yoga as an attention to all points in your body which connects you, beyond your ego, with the whole world.

Here someone is trying to grope for the core of our nervously lit life, of our painfully empty doings. The resulting sculptures, large or small, are like cheerful witnesses: astonishing, surprising, refreshing, cheerful and modest, funny and serious at the same time, heart-warming.