YES, WE ARE OPEN!

After walking around the park 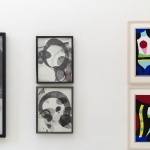 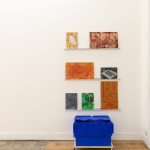 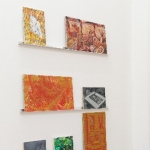 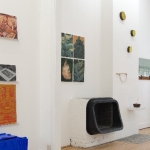 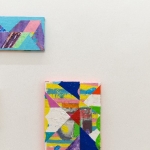 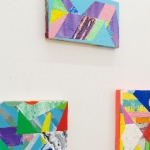 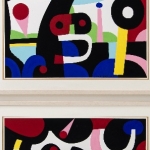 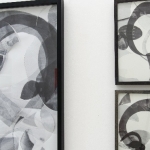 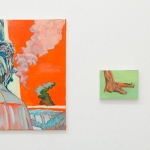 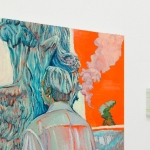 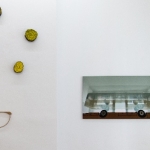 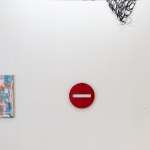 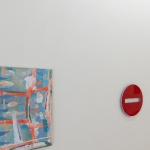 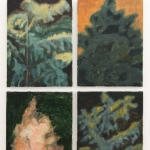 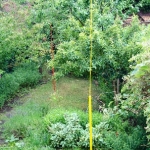 Coherent to the actual safety guidelines we invite every week some of the artists to be present in the gallery on Thursday, Friday or Saturday.

EGBERT AERTS (°1959, NL, lives and works in Kontich) his works shift between abstract and figurative. His recent gouache paintings originate out of a nostalgia for the material and it's fragility on the paper surface. They show us the relations between a restricted palette of colours. Sometimes just black and white. Pulling our attention to the purified, funny figures in joyful constellations.

MICHIEL ALBERTS (°1972, NL, lives and works in Antwerp) works since at a new ongoing project 'New Days To Come'. Through drawing and video-performances he researches the state of the body though layers of space and time. The works that arise show contain a form of proclamation about the human condition. In the actual context of Covid-19 this imaginary timeline suddenly transformed into the here and now.

Alberts defines his work body of work as physical drawings. Since 2002 he's active as a visual artist. As an actor he graduating at theatre-school in Maastricht and DAS-theater in Amsterdam, where he worked with Jan Ritsema a.o. He created his own physical language. In 2008 he was laureate at het HISK in Antwerp. His work was on view in Belgium, The Netherlands and abroad, including ‘El Manifesto De Santiago’(Chile , curator Philippe Van Cauteren); FRAC, Metz, (FR); Ludwig Forum Aachen (D); Extra City (Antwerp, B); Deel 1, De inleiding (CC Belgica Dendermonde); Lokaal 01(Breda); Croxhapox (Gent, B); Gemak Art Institute, Den haag (NL), STUK, Leuven (curator Eva Wittocx); De Singel, Antwerpen (B); Eva Steynen.Deviation(s); Antwerp (B), SMAK, Ghent (B)

CHRISTINE CLINCKX (°1969, B, lives and works in Ekeren) composed each day during the Covid-19 quarantine a self-portrait using cut-up photo negatives of family pictures and she also assembled them into a book. As such, it can be 'read' as a visual diary of these strange days. Themes in her work are time and history and how people deal with it. Through de- and reconstructing fragments of personal and familial histories, she visualises events hidden in our collective memory. In her installations, performances and photographic work real objects or persons Clinckx shows beyond all recognition with respect to people's choices in history. Clinckx confronts us with our process of memory and challenges our comfort zone.

ELINE DE CLERCQ (° 1979 - B lives and works in Antwerp) after graduating in 2001 at KASK Gent, she combined studio practice with an international job for Koos resulted in years of travelling abroad, with twice per year a stay in Japan. The result is an international view on art and culture with a multitude of influences on perception of paintings. In 2016 painting became the first priority and the studio in Antwerp is now home base for painting trees and portraits of women. As an independent artist Eline De Clerq her goal is to make connections and to create collaborations with other artists. The paintings and drawings of trees are an ongoing series on natural shapes. Taking inspiration from forests and growth structures, these trees are a metaphor for human relations and identities. The different species of trees portrayed in the simple line drawings bring an organic style to the room, opening up architecture for nature.

In Benoît Felix his cut-out drawings, the treat in crayon or ink literally frees itself from the frame and traces itself into the dispositions of space. By cutting out the representation of a subject and positioning it in the space, he gives back to the drawing its value as an existence in reality. Having a background in Lacanian psychoanalysis Felix uses the ambiguity of language as a performing art. Fascinated by the possibilities of digital video he creates layers of visibility in the image-frame and hors-champ. Benoît Félix exhibits since 1992. Laureate of the price Georges Collignon, MAMAC (Liège). In 2005 'Dessiner' was his first solo show in Brussels, many will follow in Belgium and abroad. Next to his cut-out drawings on Tyvec his (video-)performances became part of his body of work. In 2015 he presented his playful video-performance 'running after' at Performatic, Kaaitheater, Brussels and in 2016 a duo-show with Bernard Gaube in Botanique, Brussels. His collaboration with Olivier Nottelet during Antwerp Art Weekend 2017 was an eye-catcher.

NICK HULLEGIE ( °1970, NL, lives and works in Antwerp) studied Monumental and Architectural design and Arts from 1991 till 1996 in Arnhem (NL) and was a laureate at the HISK, Antwerp (2004 – 07). He exhibits in the Netherlands and later in Belgium and Germany since 1996. Since 2003 his sculpture 'Grow Up' is part of the Martha Herford (D) collection. In 2018 he created 'Penarie', a playful sculpture for a roundabout at the Zurenborg quarter in Antwerp. As well as in his sculptures as his two-dimensional work on paper and canvas, the optical illusion and the inversion of spaces are recurring figurations. Everyday utensils Hullegie integrates in playful architectural structures. Forms are reduces to their essence and what looks evident at the first sight is undermined with a surrealistic touch, always attended with poetical sense of humour.

PATRICK KEULEMANS (°1958, B, lives and works in Kumtich-Breisem and De Haan)

The correlation between language and image are deeply entangled in Patrick Keulemans' work, based on a fascination with language-communication. More specific his body of work refers to metaphors for the (im)possibility of communication and interaction. His playful sculptures and installations have a delicate sense of humour - reminding us how we are imbedded in discourse - sometimes they carry references to ancient cultures.

After his studies in Mechelen and Luca school of arts, Brussel, Patrick Keulemans worked from 1988 till 2018 as a professor graphic design. From 2009 to 2011 he interrupted his teaching and fully concentrated on his artist practice. His work was on view in Belgium and abroad including Whitehouse Gallery, Lovenjoel (B), De Vooruit, Gent (B), Hispano American Cultural Centre Havanna (CU), CC Maasmechelen (B), CC de Warande, Turnhout (B), C-Mine, Genk (B), CC de Werft, Aalst (B), Verbeke Foundation, Kemzeke (B), Brafa Brussels (B), Art Palm Springs (CA/USA), galerie Martin Kudlek, Köln (D), Casa Sabino, Mexico (MX), B53, Arnhem (NL), Eva Steynen.Deviation(s), Antwerp (B). He prepares solo's for Museum M, Leuven, Mexico City and Bilbao (ES) .

After living in London, New York and Berlin J.U. Kubiak recently moved to Belgium. His first shows in and around Germany consisted of oil paintings. In his drive to explore other media in the research of depth and layers Kubiak's work shifted in 1992 to photography, working with Ludwig Rauch under the artist duo name Kubiak & Rauch. During then years they explored the transparency of layers and the use of different supports in the photographic process. Today these aspects are still present in Kubiak's paintings. The basis of his work are underlying structures he distillates out of his photographs, made during his wanderings through cities. The figuration seems to disintegrate in the composition, leaving visible every brush stroke, interfering and creating new constellations. Whilepainting the works lie flat. This opens a space of possibility and omits the awareness of up and below. In an intense concentrated process figurations and forms emerge into variated structures of vibrant colour.

J.U. Kubiak exhibits since 1992, he worked with several galleries in Germany and internationally.

MICHAEL LAIRD (°NY, 1963, lives and works in Antwerp) can be considered as a post-modern painter pur sang. Educated in the traditional skills of drawing and painting, but being as much a reader and a thinker, he connects conceptual research with a painterly approach.

His psychedelic atmospheres and use of saturated colors and pictorial deformations are reminiscent of psychedelic underground movies. Intense, sometimes even frivolous colours that can be considered as an ‘offense against good taste’ dialogue with the charcoal under-drawing, showing the pictorial process in a rather ‘incomplete’ state, creating a tension between these parts and the more elaborated ones, the artist creates concentrated, isolated images/objects that might invite the visitor to compose alternative sequences or possible storylines. (Excerpt from a text by Johan Pas)

FRED MICHIELS (°1966, B, lives and works in Sambreville) his lively coloured works are vigorously painted with a flair of humour and self-reflexivity. Oil on canvas is alternated with different kinds of paint and supports.When the world is grim and there are no other stories to tell, Michiels finds a playful way in a freedom of painting. One in which nothing is pre-determined, in which there are neither obligations nor prohibitions, in which nothing is foreseeable. Overpainting and -printing are part of the process. There is no such thing as an ugly color or combination. Michiels' vigorously and instinctively formal painted tropes are sincerely and full of pleasure.

ROBERT SOROKO (°1990, B, lives and works in Antwerp) seeks for ways how to let his sculptures stay mobile. By wind or by hand they move very subtile, almost invisible. Hard materials like metal he forms as if welding has suddenly stopped. Although they are robust they show a purified simple line. We already saw his works combining soft bamboo with iron. During the Covid-19 lockdown he started to work on a series for outside. This new steel figures come in clear basic colours. Making a different intervention depending on the material an space. They recall to old cultures figures, walking out of ancient myths.

JAN VERBRUGGEN (°1980, lives and works in Brussels) makes paintings, drawings and installations. In his paintings imaginary landscapes are seen from above, opening the perspective and disorientating the viewer. Wandering figures overlook landscapes together with the spectator, or are immersed in the scenes. Verbruggen explores the boundaries of the territory that surrounds him. Orientation is essential in this process, like a map is indispensable when traveling. Not only the artist is searching for navigation and timing, also the spectator is challenged to leave the focus-point and to wander through the scenery, where every brushstroke is visible and reveals another detail.